in HAND TO HAND COMBAT

Odbrana is a realistic self defense, tactical and hand to hand combat system of suppressive measures designed specifically for military, police, security, kids, adult and women.

Odbrana is extremely effective and applicable in everyday situations to demobilise an attacker on contact with little effort. It involves a combination of strikes, kicks, blocks, chokes, locks, throws and submissions. Unlike other forms of self defense from around the world, Odbrana teaches the individual to defend himself against multiple attackers with or without weapons from numerous vulnerable positions while under constant stress. It teaches the individual to always be aware of his surroundings and to act with caution. The individual is trained in situations with the emphasis on survival rather than retreat. In addition to hand to hand combat, the individual is also trained in the disarming of guns, rifles, knives, bats, batons etc. There are no age, weight or height requirements in practicing Odbrana. Odbrana is very convenient for adults, women, and is perfect for children’s psycho physical development and mobility. 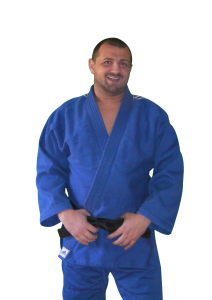 Creator of ODBRANA is Vladimir Mr.V Djordjevic, ODBRANA Chief Instructor of Real Aikido, Jiu Jitsu and Tactical Training for more then a decade in USA, Canada and South America. Vladimir Mr.V Djordjevic, U.S. citizen of Serbian descent, was inducted into the U.S. Martial Arts Hall of Fame 5 times and holds a 6. DAN in Real Aikido, 6. DAN in Jiu Jitsu and a 7. DAN in Aiki Jujitsu.

Vladimir Mr.V Djordjevic has served in the Serbian Military police and Anti-Terrorist Unit. He was a Head of Security team for Netherlands Embassy & Central Committee Tower in Belgrade, Serbia. (early ’90s under Komet Tim Company) As combat and tactical instructor, Vladimir has singled out hundreds of the original techniques and purified them to effectively take complete control of a hostile situation.

He has been featured on CBS2 TV as the most recognized rape prevention instructor to date. He is an Ambassador of martial arts, an internationally recognized referee and very well respected as one of the main instructors for numerous military units and law enforcement agencies worldwide.

• Vladimir is currently finishing Self Defense / Hand To Hand Combat book ” Our Way ” on English and Serbian language, that should be coming out at the end of 2015.

Odbrana is the primal instinct in all of us that makes itself known when a threat is present….

You can find more about Odbrana on (Serbian language) Wikipedia.

Sign up to receive email updates daily and to hear what's going on with us!